Sunday was a fantastic day for a run. It was nice and cool in the morning and the sun was out towards mid morning. Little did I know that I would be struggling through a 10 mile run. Well ok, I DID know I was going to struggle through my 10 mile run. I haven’t been training since I’ve been working 3 jobs finding the time to get a run in was dang near impossible. Being up at 4am and working until almost 11pm, yeah…where’s the time? I’m totally blaming my sister for the peer pressure on this one. She told me that she wasn’t going to sign up unless I did. So naturally the pressure was put on and I did sign up. You can tell me how stupid that was later. HAHA

Saturday my sister and I jetted down to Reston PR to pick up our packets since we don’t like picking up our packets before hand. We prefer having everything we need so we don’t have to worry about it that morning. She and I got to Potomac River Running in Reston and it was seamless getting our packets as it usually is. There were lots of people in the store and so we jetted out pretty quickly. I laid out my race outfit the night before and of course had to post to IG. I of course had to wear all the colors with the upcoming holiday of St. Patrick’s Day. 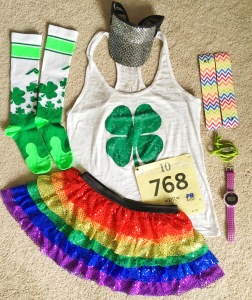 Sunday came and she and I headed down to South Lakes High School. I totally wanted to bail. I knew I hadn’t been running so this was not going to be a stellar run by any means. But I also knew I was going to be really, really sore the next day. We got down there to South Lakes with plenty of time and picked a parking spot. We were just hanging out in the car until about 7:30 before heading into the school to find restrooms and to hang out some more. I knew lots of people running and would find them at some point. I wasn’t ready to head out into the cold, and it wasn’t too bad that morning, but standing out there just wasn’t my idea of fun.

I was hoping to meet up with a running buddy but we crossed paths and totally missed each other! Big Bummer! The race started and I was hoping to finish in under 2 hours since I just haven’t put in the work. Oops! Don’t recommend running long distances without training but that’s exactly what happened to me. I started off running 4 minutes and walking a minute which quickly turned into running 3 walking 2. Add in the dreaded hills. (Who knew Reston was built on hills?!) I was walking up the hills because I just wasn’t running them. Yup, not doing it.

I did ok through mile 5. After mile 5 it all went downhill with an uphill climb. Ugh. My splits tell you exactly how I was feeling. HAHA. I kept turning around to see if I could see my friends. I didn’t know if they were in front of me or behind me. So I kept trudging along to the finish line. Oddly enough this race was mostly right hand turns. HAHA. There’s 1 or 2 left hand turns on the race course and so when I hit that first one, I knew we were almost done. YAY!

I finished in 1 hour, 59 minutes and 54 seconds! Just under the 2 hour mark. Thanks goodness! I freaking survived. Woohoo! That was something to celebrate! It wasn’t a pretty 10 miles, maybe pretty for 5 miles, but the Reston 10 miler is always a great course with great race support.

Thanks to Potomac River Running for another great event. I’ll surely be back.

Merry Christmas!! I hope you have a wonderful day with friends and family filled with laughs and good times. 🎄
One last magic visit happened this week before I went home to my family for the holidays!! #magic #mk #wdw #disney #mickey #love #fun #magic
Thanks @kookyrunner for new ornament and my sincere apologies for not posting sooner!! I’m so glad I got an ornament from you!!! #werunsocial #werunsocialornamentswap #love #fun #run
Thanks @pastrychef_dani for the wonderful surprise!! 🎄So sneaky! #sparkleswap #thesparklesquad
How could you not pass up a Saturday in the parks with these 2?
I got to spend this past weekend in Fort Worth, Texas! Thanks for the hospitality @laylaynoel and I’ll be back to visit!